A Grand Spell of Sunshine: the life and legacy of Francis Frith 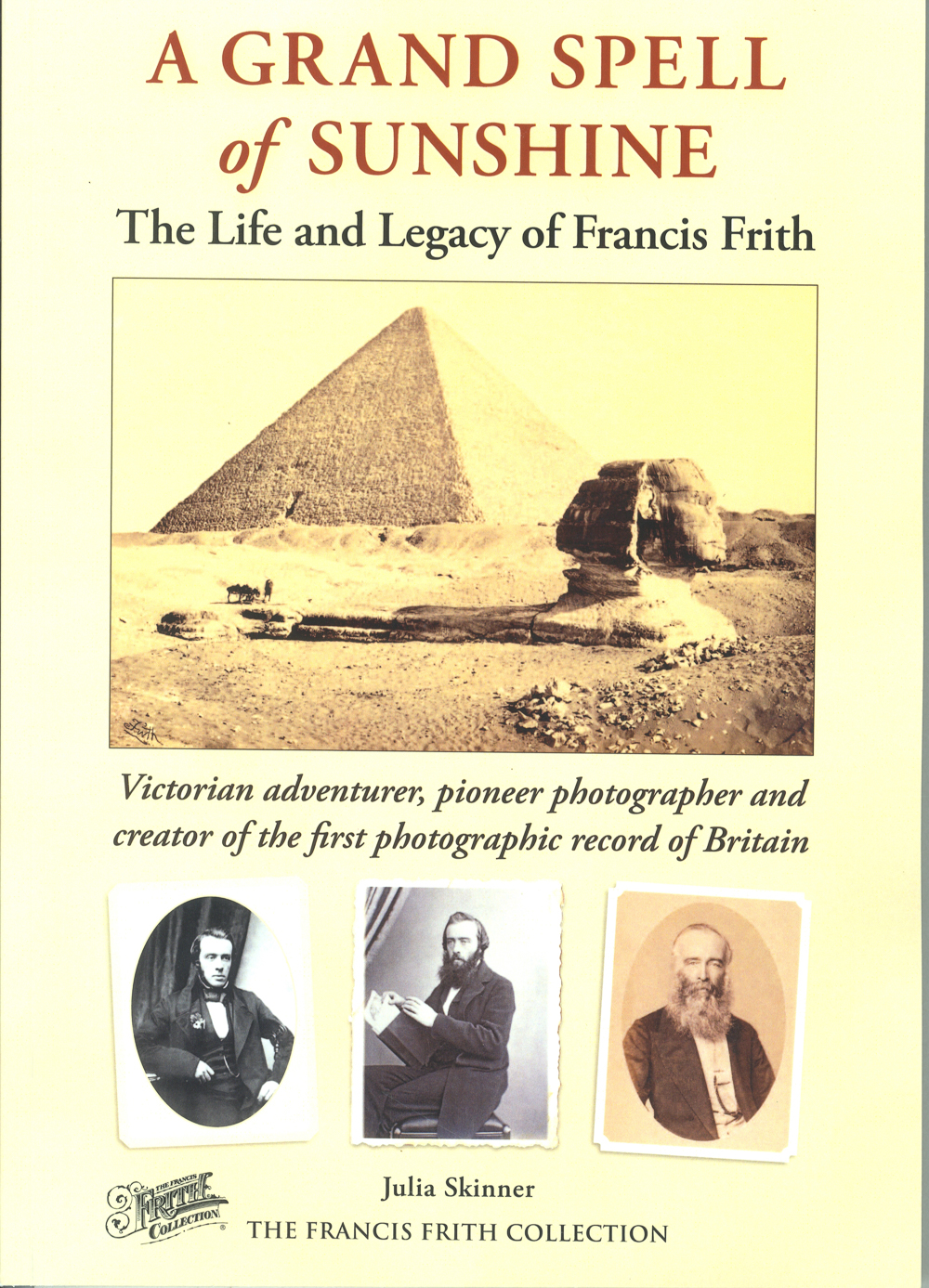 This is the story of Francis Frith, a Victorian adventurer, pioneer photographer and visionary businessman, and his amazing legacy - a unique archive of over 300,000 photographs illustrating the changing face of Britain over 110 years.

Extensively researched and published to mark the 200th anniversary of Francis Frith’s birth in October 1822, this book tells the story of his eventful and varied life in both sunshine and shadow, and is also a celebration of the extraordinary photographic legacy of this remarkable and visionary man which is now recognised as a photographic collection of national significance and viewed by millions of people around the world on this web site!

Written by Julia Skinner, photo library manager at The Francis Frith Collection, this study of Francis Frith and his wonderful photographic legacy began as a personal interest and is the result of nearly 20 years of delving into the company’s archive boxes and thousands of packets of photographs, as well as 5 years’ research into Frith’s life and travels.

A factually accurate account of Frith’s life and travels, correcting some misinformation in earlier works about him. Contains new information about Frith’s Middle Eastern photographic expeditions in the 1850s, including the identification of a number of his companions and extracts from letters written by one of them on their journey through the Sinai Peninsula. Lavishly illustrated with over 500 period photographs, ranging from the monuments of ancient Egypt to nostalgic images of the people and places of Britain between 1860 and 1970. An absorbing read for anyone interested in the early history of photography, travel and exploration in the 19th century and Egyptology, as well as British social, local and national history. His spirit of adventure then led him to make a series of arduous and sometimes dangerous expeditions to Egypt, Nubia and what was then the northernmost part of Ethiopia (now part of Sudan), the Sinai Peninsula, Palestine, Syria and Lebanon, travelling with all his photographic equipment on the River Nile by boat, or overland through the desert by mule, donkey and camel. These extraordinary journeys were packed with intrigue and adventure: for example, Frith described being held captive by bandits, fighting a midnight battle with a deadly pack of hungry wild dogs, and encountering ‘desert princes and rival sheiks, blazing with jewel-hilted swords’. The photographs Frith took on these journeys, using the wet-collodion-on-glass process in the most difficult and arduous conditions imaginable, were some of the earliest views of these places ever taken, and caused a sensation when they were published. They established him as one of the most celebrated photographers in Britain in the mid 19th century.

When Frith set off on his final expedition to Egypt he knew this would be his last adventure before he married and settled down to the responsibilities of family life. 'I would have one more grand spell of sunshine,' he wrote, 'and so finally brace up soul and body for the great events of life.'

After his last expedition to Egypt in 1860 Frith got married and settled at Reigate in Surrey, where he established a photographic printing and publishing company. He then began the incredible project that is now regarded as the greatest achievement of his life - the creation of the very first extensive photographic record of Britain.

For the next 30 years he and his company photographers travelled around the country recording in expertly taken photographs its cities, towns and villages, mansions, landmarks, historic buildings, romantic ruins, coasts, countryside and scenic views, which were sold to tourists as souvenir prints. The business he founded to meet the Victorians’ insatiable demand for souvenir views was one of the earliest and most important photographic publishing companies in Britain and pioneered mass-production photographic printing.

After Frith's death in 1898 two of his sons, and later their successors, carried on running the business and continued his monumental project into the 20th century, by which time the Frith company had evolved into one of Britain's leading postcard publishers. By the time the company closed down in 1970 it had created a unique and unrivalled record of the changing face of Britain over 110 years of amazing physical and social transformation, with an inventory of over 300,000 images depicting around 8,000 British cities, towns and villages.

After the Frith company closed down in 1970 this wonderful treasure trove of historical photographs then came close to being destroyed forever, but a dramatic last-minute intervention managed to get the photographic archive rescued and saved for the nation. A few years later the archive was purchased by the current owner and entered a new phase of life as The Francis Frith Collection. The extraordinary documentary record of Britain that Francis Frith and his successors created is now recognised as a unique and priceless legacy which is considered to be a photographic collection of national significance. 'It is difficult to exaggerate its importance,' wrote Philip Ziegler, one of Britain’s leading historians. 'No other photographic archive provides so comprehensive, so wide-ranging and so technically accomplished a portrait of the physical evolution of the British Isles since the 1860s.'