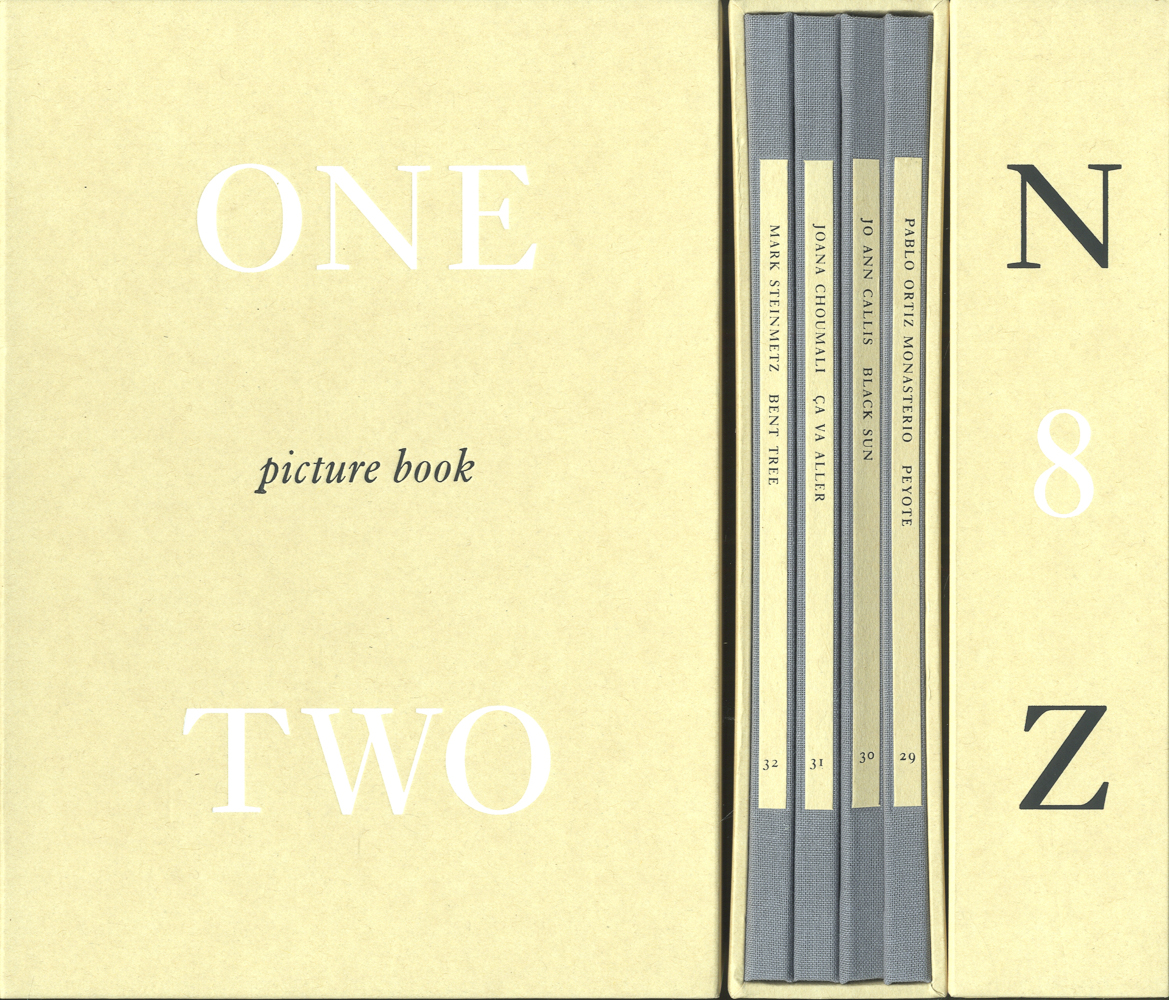 The complate One Picture Books 2 set 8 books 29-32, housed in a custom made slip case.

Each book contains a small photograph signed by the photographer in a numbered edition of 500 copies.

Bent Tree is Mark Steinmetz’s second contribution to our One Picture Book Two series. The book comprises 16 photographs of a peculiarly curved tree that Steinmetz photographed for over twenty years, beginning in the mid-1990s. The tree is a short walk from his home in Athens, Georgia, and stands on its own in a field of kudzu; a set of railroad tracks run alongside it. Steinmetz photographed the tree through different years, seasons, times of day, and types of weather. Today, the backyards of new infill homes crowd up against it, and its seemingly brave, solitary posturing has been lost.

Bent Tree is limited to 500 numbered copies, each including a 5x7 inch original print that has been signed by the artist. “Delicate threads draw colourful lines, circles and rays. They fill empty spaces, color the sky, mark the outlines of the buildings and the streets of a town in state of suspension. Solitary and silent figures, wrapped in an embrace of filaments and colourful bubbles, appear at once isolated and protected by them.

The artist Joana Choumali intervenes on the photographs she took with her smartphone in Grand-Bassam (Ivory Coast) in the aftermath of the terrorist attack in 2016. Through the meditative act of embroidery, chosen as a way to process and overcome the pain she felt at the time, she gives life to a different kind of imagery.

A gesture that is as much powerful as it is symbolic: to mend what had been torn, to reconstruct beauty where only desolation appears to be left. Most importantly, to stop and take the time to contemplate and process the feelings, the emotional response to the situations life presents us with.

Taking the necessary time to overcome pain allowed her to tap into her inner reserves of creative strength. A transformative process able to generate new meanings, give hope and make beauty out of pain, just like the soft waves and coloured lines blossoming all over her images.” — from the Introduction by Maria Pia Bernardoni

We are delighted to announce the long-awaited publication of Ça Va Aller (“It Will Be Okay”) by Ivory Coast-based artist Joana Choumali. Choumali is the first African winner of the prestigious Prix Pictet, an annual honor for photography and sustainability, which she won for her series Ça Va Aller. The prize culminated in “Hope,” an international traveling exhibition spanning numerous venues, including the Victoria and Albert Museum, London, Daikanyama Hillside Forum, Tokyo, the Mouravieff-Apostol House & Museum, Moscow, as well as venues in Zurich, Shanghai, Dublin, Monaco, and Milan (2019-22). Her work has also been featured in exhibitions worldwide, including the Royal Academy of Arts, London (2021-22); Museum of African Contemporary Art Al Maaden, Marrakech (2019-20); Zeitz Museum of Contemporary Art Africa, Cape Town (2019); and the Musée d’Histoire Naturelle, Le Havre (2017). In 2017, Choumali was included in the Côte d’Ivoire Pavilion at the 57th Venice Biennale. She was named the 2020 Robert Gardner Fellow in Photography by the Peabody Museum of Archaeology & Ethnology at Harvard University and was awarded residencies with Nirox Foundation, Johannesburg (2017) and the IFITRY Residency, Essaouira, Morocco (2016; 2015).

Ça Va Aller is limited to 500 numbered copies, each including a photograph printed on cotton canvas embellished with hand-stitching. Each artwork is unique.

Jo Ann Callis created her “Black Sun” photographs in 1976. Comprising 9 images of bodies in near-silhouette lounging poolside under a glaring sun, the work was made in part as a response to the artist’s attraction to film noir shadows. However, as the work progressed, Callis found the one-dimensionality of the shadows limiting; she therefore allowed faint details in the figures to remain visible. The artist later wrote, “Something about lying on hot hard cement was appealing; the lighting is natural and not made to look expressive. Just bright sunlight on white cement gave enough discomfort to suit my taste. Now dark and unsettling lighting went to light and unsettling.”

Jo Ann Callis was born in Cincinnati, Ohio and relocated to Los Angeles in 1961. She enrolled at UCLA in 1970 where she began taking classes with Robert Heinecken, among other prominent artists. She started teaching at CalArts in 1976 and remains a faculty member of the School of Art’s Program in Photography and Media. She has continued to photograph, draw, and paint, and her work has been widely exhibited in such venues as the Museum of Modern Art, New York; Los Angeles County Museum of Art; Hammer Museum; the Museum of Contemporary Art, Los Angeles; the San Francisco Museum of Modern Art and many others.

In 2009 a retrospective of her work, Woman Twirling, was presented by the J. Paul Getty Museum, Los Angeles. Callis has received three NEA Fellowships and a Guggenheim Fellowship, among other awards and prizes.

“Peyote, deer and corn are brothers. They are three like the three sides of a triangle and, at the same time, they are one, a multiple essence, a face that only Huichol can see…. Captain, who is in charge of the peyote gatherers, carries the staffs of power, decorated with multicolored ribbons and horns of deer. In the peyote dance, the leader carries the horns which he lifts up from time to time. The heart of the deer is the heart of all offerings.” — Ramón Mata Torres

A small, spineless cactus native to Mexico, peyote has been used for its psychoactive properties by indigenous peoples, such as the Huichol, for over 5,500 years. In his second publication with Nazraeli Press, and first contribution to our One Picture Book series, Ortiz Monasterio gives us a rare glimpse into the ceremonial uses of the plant.

Pablo Ortiz Monasterio is a Mexican photographer, writer and editor. He is widely recognized as one of Mexico’s most influential contemporary artists. Ortiz Monasterio’s work is widely exhibited and collected internationally.

Peyote is limited to 500 numbered copies, each including a 5x7 inch original print that has been signed by the artist.