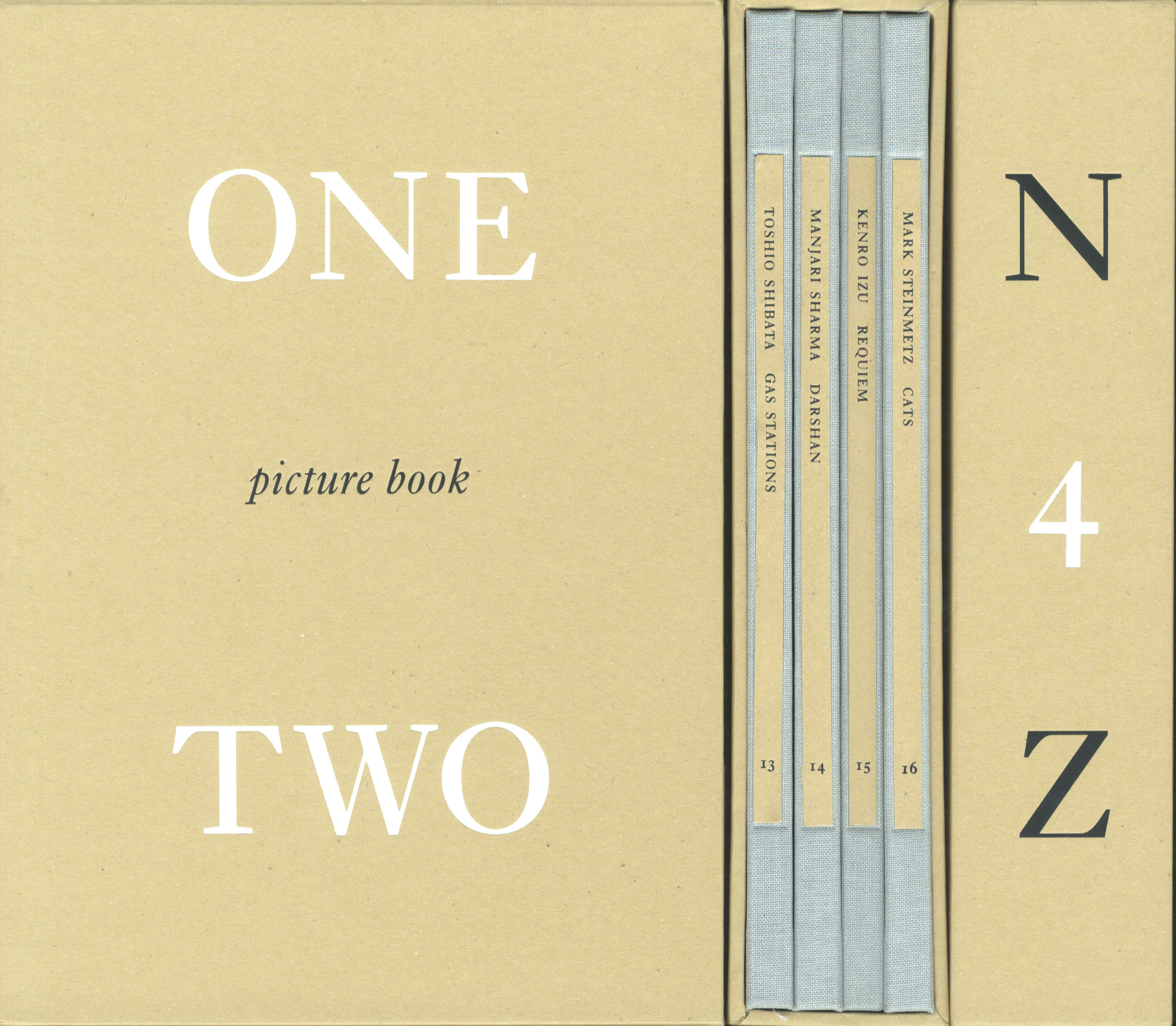 In the early 1980s, returning to Japan from a few years of traveling and living in Europe, Toshio Shibata began photographing night scenes of roadside Japan. Shibata has said of the experience of the road at night: ?While driving on a highway at night in Europe I often experienced an imperceptible momentary sensation of transcending place, yet not knowing where I was. It seemed as if I could have been in Japan, or even in the United States. I felt that the scene was non-specific, but rather a kind of generic or archetypal common scene, universal image and part of a global world-view.?

Gas stations ? especially in the dead of night ? look more or less the same everywhere they are to be found. Yet their generic look can also provoke feelings of melancholy, even romance.

Well known for his large-scale photographs of large-scale civil engineering in rural places, both in Japan and in the West, Toshio Shibata here presents the view with a book of seven jewel-like images of Japanese gas stations at night, beautifully reproduced and accompanied by a silver gelatin photograph, hand printed by the artist himself.

?Toshio Shibata occupies a distinct place in landscape photography: His pictures don't idealize pristine wilderness nor do they moralize about the damaging imprint humans leave upon the natural world. Shibata studies places of contact ? where we have altered the earth ? and finds reflection, wonder, awe.

Beauty, in his work, is inclusive, and purity is a matter of compositional elegance rather than rarefied subject matter.? ? Leah Ollman, Los Angeles Times

Gas Stations: 1982 & 1986 is limited to 500 numbered copies, each including a 5x7 inch original print that has been signed by the artist.

Darshan is a series of photographically recreated, classical images of Hindu Gods and Goddesses that are pivotal to mythological stories in Hinduism. Most commonly used in the context of Hindu worship, Darshan is a sanskrit word that means ?apparition? or a ?glimpse.?

?Having left a ritual-driven community in India, my move to the U.S. precipitated an enormous cultural shift. It was this cultural paralysis that motivated me to use my one medium of worship ? the camera ? to study, construct and deconstruct the mythologies of my land. The goal was to turn multidimensional memories of sculptures and ornamental paintings of Hindu Gods, into two-dimensional photographs. For centuries, the way that we have experienced darshans is via laying gaze upon a molded figure, a carved statue or an illustration that represents a likeness to avatars described in Hindu scripture. This series of images invites the viewer to consider a photograph as means of spiritual engagement.? ? Manjari Sharma

Born and raised in Mumbai, India, Manjari Sharma makes work that is rooted in portraiture addressing the issues of identity, multiculturalism, and personal mythology. Manjari's work has been recognized, awarded, published and exhibited internationally.

Darshan is limited to 500 numbered copies, each including a 5x7 inch original print that has been signed by the artist.

In 79 AD, the city of Pompeii in the south of Italy was destroyed, buried beneath volcanic ash when Mount Vesuvius erupted. At the time of its destruction, the population of Pompeii was estimated at 11,000 people. After the eruption, the city was lost for about 1,500 years until its rediscovery in the late 16th century. The objects that lay beneath the city had been preserved for centuries due to the lack of air and moisture. During the excavation, plaster was used to fill the voids in the compacted layers of ash that once held human bodies, enabling archaeologists to see the exact position a person was in at the moment of death.

The original casts are kept in an archive within the Pompeii site and because of their sacredness and fragility, it is prohibited to move them to other locations. Second generation copies of the casts have since been made, and are loaned out to museums for exhibitions, both locally and internationally, but no individuals are allowed to borrow them.

With the support of the Ambassador of Japan in Rome, the authority of Pompeii graciously made an exception, and granted permission for Kenro Izu to remove a selection of the copied casts in order to create photographic compositions at the Pompeii sites. In addition, the Pompeii authority has permitted Izu to photograph the original human casts in the archive building as ?portraits? of the people of ancient Pompeii. For the work of Requiem, Kenro Izu created an imaginary scene of sometime after ?the day?, when lives were extinguished by the eruption of Mount Vesuvius, but among the scattered dead, plants have started to grow once again.

This huge volcanic eruption, almost two millennia ago, is as if a nuclear explosion were to happen today. This thought makes one fearful of such a possibility taking place, anytime now, to us.

Requiem is limited to 500 numbered copies, each including a 5x7 inch original print that has been signed by the artist.

Mark Steinmetz?s first book of cat photographs, Ancient Tigers of My Neighborhood, was published in a limited edition as part of our Six by Six series, and was nominated by Robert Adams as a ?Best Book of 2010? at the Kassel Photobook Festival in Germany. For his first contribution to our new One Picture Book Two series, Steinmetz again has chosen cats as the subject and we are pleased to make this aspect of the artist?s work available to a wider audience.

Cats is limited to 500 numbered copies, each including a 5x7 inch original print that has been signed by the artist.