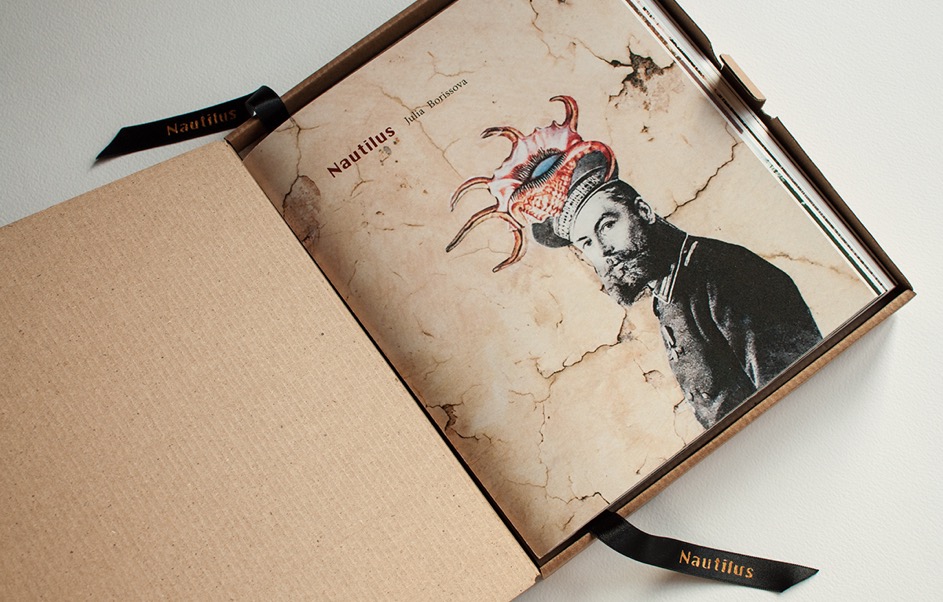 Handmade and cut by Hand limited edition of 315 copies, 46 photos on 72 pages, folded to 205 x 250 mm, open spread 615 x 250 mm,
printed on strong paper, housed in the box.
This unbound artist's book encourages the viewer to interact with and imagine the multiple possible forms. Each copy is signed, folded and cut out by hand creating a unique book every time. The Nautilus project was meant to be as an imaginary museum, whose exhibits were dispersed in the urban area. Whereas the showcase of the museum protects an object and isolates it from the audience, I placed my pieces of work right in the streets of Kronshtadt. Being fully aware of the impermanence of the paper col�lages, I chose for them such walls that kept the traces of time. I was obsessed by a desire to feel them and to know the town by touch. The cracks and stains on those walls resembled either some underwater land�scapes or manuscripts of an unknown civilization or a message to the future left by every passing day. I wanted to capture their essence, bringing the images of the marine world and a human, which tried to conquer the waves.
The Nautilus project keeps developing as a book, that is a mobile exhi�bition and installation. The holes in the pages allow the viewer to focus on the separate fragments of images and to divide the figures and the background. This idea occurred to me as reference to Captain Nemo?s Nautilus in the book by Jules Verne. This submarine was a sort of museum and gave an opportunity to contemplate the ruins of Atlantis through the observation glass.

What is a museum? One brief definition is offered by Wikipedia; an institution that cares for a collection of artifacts and other objects of artistic, cultural, historical, or scientific importance. Then what is an imaginary museum? This is the subject of Julia Borissova?s recent photobook Nautilus. Borissova?s urban setting for her imaginary museum could also be considered an imaginary city, as until recently Kronstadt, a heavily fortified city off the coast from St Petersburg, Russia, was closed to outsiders. A mysterious island fortress city that could be seen and experienced only from a distance. To investigate her concept Borissova created a series of paper photo-collages that she affixed to the exterior of the walls of various buildings and structures within Kronstadt. Unlike a museum these paper photo-collages are impermanent and affected by the natural elements of sunlight, moisture, temperature and individuals who in passing reach out to connect. She then documented the location and placement of these transitionary elements to create a historical record and then noted their locations onto an old city map creating a Museum Guide to direct the imagination. A copy of this Guide is included with her documentation project of her imaginary museum, but without a cross reference to the site locations and the visual records. The lack of context further ensuring that the reader will require the full use of their imagination when using her Guide as to what is potentially located where with the minimal visual clues. As a site-specific artist project questions arise as to why one location is selected over another and why is a specific photo-montage applied to a specific site? She provides some background as to her choices; ?The cracks and stains on those walls resemble either some underwater landscapes or manuscripts of an unknown civilization or a message to the future left by every passing day.? We are transported to her imaginary museum by a convoluted, layered and complex book object. To compound the complexity and ensure multiple readings to tease one?s imagination, Borissova did not bind the book?s interior pages but allows these to be tucked loosely together. To the point that once the unbound book is dissembled to evaluate the various visual combinations, one is not entirely sure that the subsequent reassembly may be correct. As though that might really be relevant for Borissova?s conceptual purpose and intent. Many of the pages have die-cut holes resembling port-hole windows and we swept away on a voyage similar to one undertaken by Jules Verne?s fantasy ship Nautilus under the direction of Captain Nemo. On this voyage we are offered brief glimpses of a vision and upon turning the page (corner) and opening the gate-fold to encounter the grander view. After encountering a number of these visual teasers, the reader can start anticipating the larger perspectives yet to unfold. Borissova thus offers us a wonderful opportunity to visit and dream in her imaginary museum based on the urban landscape of Kronstadt, the once imaginary city.